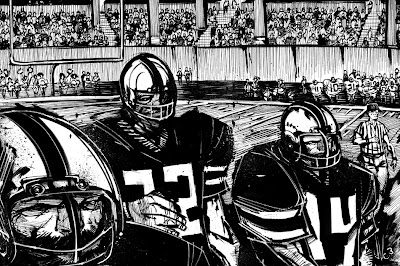 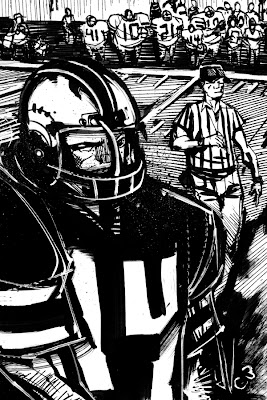 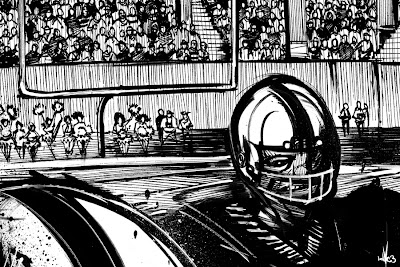 Believe it or not, I've been a football fan since childhood. I was raised in a football household, in a football neighborhood, in a football town. I even played for a season in high school. That is, if you consider sitting on the bench for all but one play at the end of a blow-out game "playing."

So it's no surprise that my love of American "Gridiron" Football has found further expression in my illustrations. I've had a lot of fun with this subject matter. Especially during the 2011-2012 NFL season, which found me doing color drawings & rough sketches in friends' homes & sports bars around the Greater Los Angeles area. With today's piece, I wanted to delve back into that world... to sink the viewers into the mud & torn up turf, the noise & spectacle... the relative calm before the storm of 22 men in pads stomping the living snot out of each other, all in an attempt to get 15oz of inflated leather across their opponent's goal line.

Here we go again! Welcome to Series 4 of my daily illustration blog, Alphabet Attack! For the next five weeks, I'll be posting new black & white drawings, Monday through Friday. Enjoy the eye candy!